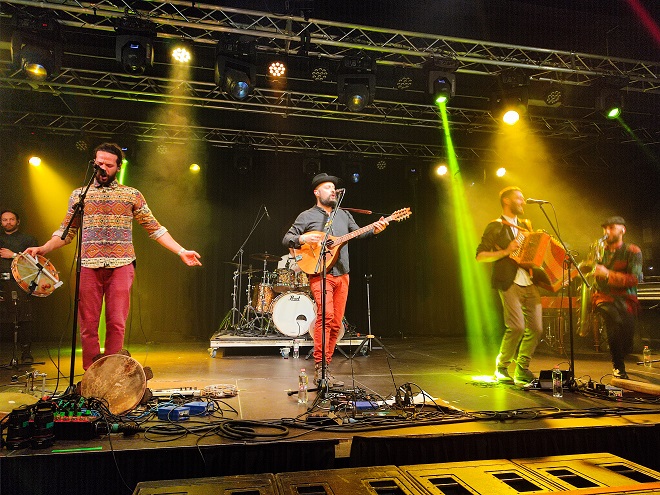 When the single Mediterraneo Express was released in 2020, I was surprised because it contained quite different music than your previous records. Was this a one-time attempt, or are you moving on this direction?

Mediterraneo Express was a beautiful experiment of inclusion and communication between different musical worlds that coexist on the same territory.

The idea was to bring together artists such as Alessia Tondo, Nabil Bey and Sud Sound System in an idea of ​​music that was purely Kalàscima but respecting the sound of origin of each one.The result was, of course, a new sound in which each artist was able to recognize himself. For the Kalàscima team it was a moment of great creativity, a moment in which we completely eliminated any limit to the composition with the aim of a mixed sound, new but always in our recognizable style. The result and the process excited us, also because the artists involved are exceptional, we do not exclude any possibility in the future, music is freedom.

One of my favorite songs from the last album is “Sex Drug and Pizzica Pizzica”. Where did the idea for this come from?

Sex Drugs and Pizzica Pizzica is a provocation.

The inspiration comes from a phenomenon that occurs every year in Salento. In the summer hundreds of thousands of people come from every corner of Europe and the world to enjoy the beauty and energy of this territory.Summer here is hot, crowded and never sleeps, there are many musical events of any kind and size, from tekno to folk, from events where people dance barefoot by the sea to the most elegant ones that take place in the theaters and courtyards of the wonderful palaces in Baroque style.We realized how people today can easily pass from one context to another, from a rock concert to a religious procession, from a disco night to a popular party.In this atmosphere of multicolored frenzy everything mixes, and we composed Sex Drugs and Pizzica Pizzica to describe the coexistence of all these realities with our music.

How popular is it at concerts anyway?

it is a song that is very popular because it is transversal, suitable for all types of ears. it's a pizzica pizzica played like an electronic punk song with a rap singing. The audience hears all this and goes wild

Do you regularly invite guests to studio recordings? Is this because of your maximalism, or you are not enough to realize the imagined sound?

We have always involved musicians who are basically friends who have the pleasure of collaborating with us.We are lucky enough to belong to a very solid and very extensive musical movement and we think that music is a wonderful language that brings people together to create beauty. In this context we have the opportunity, the honor and the pleasure of being able to compose music that includes the collaboration of these friends. In this way we strengthen our friendship and push beyond our compositional possibilities.

Last October, I spoke with Claudio “Cavallo” Giagnotti and he said that there would be no craftsman soon who can make the hand drums that are essential for pizzica pizzica. Do you see these instruments are really important to preserve the South Italian musical tradition, or can modernization eliminate this?

Claudio is a friend who sees the evolution of our musical genre.The evolution touches the way of composing, the finalization of this type of music and the characteristics of the instruments that are played, this happens for all genres, at all latitudes. Personally I believe that, as in the rest of the world, the frame drum cannot disappear, the Italian drum is the basis of folk music and its technological evolutions are the basis of the new music that comes from our musical environment.This kind of evolution don’t change the nature of the instrument but respond to the needs of new players who evolve the technique or have needs related to the reliability or versatility of the instrument.About craftsman  I think there are some prominent realities in Italy and especially in Salento that are keeping the evolution of this wonderful instrument alive in a competitive way.

Do you agree with the view that Kalàscima plays neo-folk music or new urban folk music?

Yes, I really like the concept of new urban folk music because what we do is just that: to keep alive this musical language made up of specific timbres, canons and techniques by putting it in communication with today's music, through today's technology, in today’s contexts and for today's listeners through new compositions and new ambitions for the genre itself that is proposed on the worldmusic scene through contamination.

The band has also had online gigs. Do you think this will be as common in the future as live performances?

Certainly we are moving towards a digitization of human life and certainly online concerts are a possibility to be considered in an almost televised perspective of a concert.We, as performers, have the visceral need for contact with our audience, especially for the type of music we play which has many ritual elements in its history and cannot ignore the physical dimension of the concert in order to be communicated in the best possible way.

Where did the idea to play with Besh O droM come from?

We have to thank the Budapest Ritmo festival and its artistic direction who proposed this collaboration to us.

Are you planning a joint album with them?

Not for now because we are focused on other productions that we started some time ago and that we will release in the near future. Besh O droM are a fantastic band, it was great to meet their music and we will certainly meet again in the future.

Finally, I have to ask this question. When is the next big record expected and would you tell us something about it?

The answer is soon! We are already working on a new recording project that will represent a new step forward for us and for the concept of new urban folk music we have talked about and that we are evolving day by day in the last 21 years.The date is still a secret but we will not be late, follow us to find out.