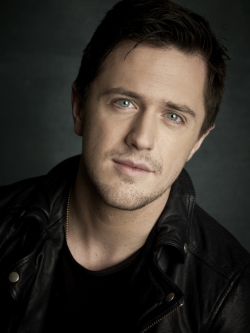 Pierce Brown, author of Red Rising, Golden Son, Morning Star and Iron Gold, is going to visit Hungary soon, during the 25th International Book Festival Budapest. (You can read more about the visit and the related events here.)

Due to this occasion, we discussed sci-fi and writing, meritocracy and graphic novels with him: interview by Dominik Szabó. Many thanks to Ferenc Benkő for the translation. Photo by Joan Allen.

I imagine Iron Gold to be the elaboration on the most difficult questions of Morning Star (What happens after the fighting ends? Who will rebuild the world?), not to mention that the Hungarian title (Years of Chaos) holds out little hope... Am I right if I say that you’re not a writer who prefers "happily ever after"-stories?

I wouldn’t go so far as to say that I don’t enjoy happy endings. I think some stories resound because of their happy endings, while some stories would be disingenuous if they ended on anything less than a bitter note.

The Red Rising world has always been defined by its shades of grey, rather than its black and white depiction of conflict. That is why I thought it appropriate to explore the inconvenient questions of what happens after Morning Star.

I read in several interviews that you had the original trilogy in your mind from the beginning. What about the new trilogy – you had pre-made plans anyways, or you began thinking about further events after Morning Star?

I did not have the second trilogy planned until I finished Morning Star. So many questions were left unanswered. And as those questions began to bounce around in my head, I knew that I wouldn’t be satisfied leaving their world where I left it in Morning Star. There was so much for me to still explore thematically, geographically, and dramatically.

Red Rising was published when dystopic fiction flourished and was immensely popular. What do you think, how and in what direction do these trends shape fantastic literature?

They serve as cathartic outlets for us to vicariously escape or object from and to the current state of affairs. I anticipate that dystopian literature will continue to have a strong presence in the market because of increased disillusionment in the youth due to ever-increasing transparency. Then something will come along that shatters that diluted market, and is pure escapist romanticism, which will lead to less dystopia and more up-beat novels. Then the cycle will repeat, as it has always done.

Several articles were written in the past (for example, by Charles Stross here), that there are less and less science fiction out there that really moves the audience. What’s your take on this? Do you feel that science fiction literature is in crisis?

I certainly do not. Science fiction is a vast, undefined field.  Hard science fiction, which echoes the style of Niven, Arthur C Clarke, (sometimes) Heinlein, is certainly less popular than in its heyday – much of that popularity having been transferred to things which are a bit more science-fantasy. But the scifi world is filled with fantastic modern talent in Andy Weir, James SA Corey, Ann Leckie to name just a few. Personally, I disagree with the viewpoint that only science fiction that is plausible and backed by science to the smallest  detail  should be considered science fiction. If we had such a rigorous entry exam, books like John Carter of Mars, Dune, Hyperion would not be considered science fiction.

You finished a trilogy in the Red Rising-universe, then published the graphic novel Sons of Ares, not to mention the buzz about the adaptations to the big screen... Did you ever think of starting something entirely new instead of the new trilogy?

Oh, I definitely intend to dive head first into other projects as soon as I can – but I feel as though I should honor my commitment to readers and finish the Red Rising series before opening the mental floodgates to my next projects.

Sons of Ares, co-created with Rik Hoskin, was published last May. Was writing a graphic novel any different, especially with someone else?

Exceptionally different. Rik is quite the talent, but since I had very little experience in writing graphic novels, I was forced to rely on him much more than I anticipated. It was a strange process letting someone else’s words fill the mouths of characters from the Red Rising universe.

I read that before writing Red Rising, you’ve already finished six books. After the success of the trilogy, can we expect these to be published, as well? Would you tell us about these?

Gods no! I look at those books as a learning experience. I certainly learned how NOT to write. So I think I’ll keep those in my dusty digital cupboard and only take them out if I get extremely desperate.

You’re an active user of social media, Facebook, Instagram, Twitter, you regularly organize book premiere tours. Do you think that keeping in touch with your fanbase is essential? Doesn’t this take too much time from writing?

I don’t believe it is essential for everyone. But it has been key to my success. I enjoy the creation of community, and connecting readers with one another. But I really have had to back off of late, since you’re right: it does take quite a bit of time from writing. Some authors absolutely love social media, but I find myself more intrigued by writing and pretending that nothing else is happening in the world, so I abstain from keeping any of the applications on my phone.

The most exciting thing about the caste system of your series was that it felt like some extremely deformed meritocracy, where there are actual differences between the talents and knowledges of the groups. Do you think that an actual meritocracy is a viable option?

I don’t think an actual meritocracy is a viable option, no. Because I think we saw in the Red Rising world how that meritocracy nearly always devolves into plutocracy as wealth, priveledge, power are passed down through the generations. But yes, there are seismic differences between the talents and knowledges of the groups. Golds have higher intelligence quotients than Reds. They have larger bodies. Better immune systems. But that doesn’t make them MORE human.

If you’d live in the universe of Red Rising, which caste would you like to be born into?

Blue, most likely. You can fly awesome interplanetary ships without being subjected to too many of the systematic class abuses. If you’re a Red you pretty much die by 40. If you’re a Gold, you better watch your cup for poison.