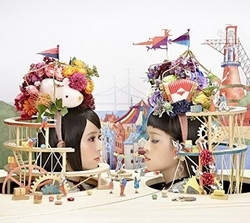 There is nothing peculiar about a seven-year-old girl going to the circus (Cirque du Soleil) with her parents. Yet it is a little unusual when, under the influence of what she had seen there, she writes to Santa Claus declaring herself a good child and asking for an accordion. What makes this story truly outstanding, however, is not that she received the desired instrument for Christmas, but the location: all these events took place in Japan, where accordions are not exactly popular. But this is not the end of the story: Koharu Matsunaga did not only fall in love with the instrument, but in time she learned to play it so well that now her talent is recognised internationally.

Her sister, Momo Matsunaga started singing at the age of 16. She had been a member of multiple Tokyo-based bands, not only gaining experience in stage perfomance, but getting her hands on a plushy piglet somwhere along the way, which is with her during concerts still to this day, and usually accompanies her to official photoshoots, as well.

It was only a matter of time for them to try and see what they are capable of in the music industry together. In 2009, the moment came, and they formed their duo with the strange name Charan-Po-Rantan. What`s more, they are active still to this day, publishing one record after the other, now under the guarding eye of an impressive record company (Avex). It seems like the siblings made their dream come true, and Santa Claus made the right decision by choosing that accordion as his gift.

The album, Théatre Théatre, published in 2014, can be regarded as a sort of divide in the history of the band, in the sense that first-time listeners will probably be able to decide whether they like their music or not by the end of the first track. Charan-Po-Ratan does not adhere to what we are used to from Japanese pop-bands, after all. First of all, it is nearly impossible to define their style. The siblings describe it as „alternative chanson", but I doubt it means anything to most Japanese, and even here in Europe it starts to lose its significance with the major French chanson singers having disappeared decades ago. Thus, everbody tries to categorize the band`s music based on their own experience, some with more success than others. Therefore, I would advise everyone not to sweat over defining the genre, but rather decide whether they like the music for themselves.

Some say that traces of J-pop can be found on this album, but I was unable to track anything of the sort. The European influence is a lot more obvious, though I hardly find that strange, if we take the presence of the accordion into consideration. The record is a very energetic and joyful product regardless, with evident influence from circus and theatre arts, vaudeville, floor shows, Balkan brass bands, klezmer and French chansons, as well as punk music (and pop, according to some). The track „Workaholic" is the odd one out, as it seems to be an alternative billboard number one song.

Still, what suprised me the most was the adaptation of the song „Amikor én még kissrác voltam" (When I was a little boy) by the Hungarian band Illés, called Nande-Nande. The girls have mixed klezmer, punk and Balkan music in their cover, which is quite different from the original in terms of the instruments as well as the language. Using accordion instead of flute is simply genius, with support from the musicians of Cancan balkan creating a fantastic atmosphere. Unfortunately, I could not find an offical video for this performance, and nothing else does justice to it.

Interestingly enough they have barely changed anything in Edith Piaf`s classic (Hymne à l`amour). They kept the original pace and Momo`s singing abilities can probably be appreciated the most in this song. The only novelities are the band joining in at halftime, and the lack of backup singers – I genuinely like waht they do in their cover songs.

Charan-Po-Rantan delivers the same energetic, joyful, but not typically Japanese music on their first grand record that made me like them in the first place, while still having the energy for such strange songs as „Workaholic" and hits like „71oku Piece no Puzzle Game". If you love eccentric music that is related to schrammel, vaudeville and the circus, and even touches up on the melodies of the Balkan, you most definitely won`t be disappointed.

Written by: Tamas Galgóczi
Translated from Hungarian by: Sarolta Szabó