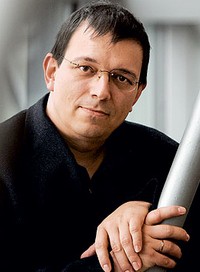 Galaktika: First of all, Die Haarteppichknüpfer has a quite interesting title. How was the idea of the Haircarpet makers born? Which one was the first, the word Haarteppichknüpfer or the idea?
Andreas Eschbach: The idea was first. I wanted to write about people who spend all their lives working on something extreme, something one could doubt whether it is a wise usage for a whole life. And somehow I came up with that image of people knotting carpets from human hair, a work so demanding that they will at best achieve at finishing one single carpet in their whole life.

Galaktika: The novel has a unique structure, it reminded me of Luis Bunuel’s The Phantom of Liberty, where all the characters introduced have a whole new story not necessarily related to the previous ones.  The difference is that your characters’ own stories give a bigger, coherent and shocking story. Why did you decide to make it this way?
Andreas Eschbach: In the very beginning, all I had was a short story which later became the first chapter - and the idea of writing another short story, a complement to the one I had, to show the absurdity of this all from the other angle: Which later became the chapter before the last one, the chapter that resolves the story behind it all.
But then I felt that these two stories where to far apart from each other and that I should insert some more to make the steps from the first one to the last more comprehensive. Which gave me the idea to try whether I could write a series of independant short stories that create, when read in order, a whole different and bigger story.

Galaktika: Your first short story was published in 1975, still the readers had to wait 20 years for your first novel. Why is that? Reading Die Haarteppichknüpfer I can say it absolutely doesn’t feel like a first novel. How long have you been working on it?
Andreas Eschbach: It isn`t my first novel - it is only the first novel I wrote with the intention to publish it. In the twenty years that passed between my first published short story - which wasn`t good at all, as you would expect it from a 15-year old pupil - and the publication of "Die Haarteppichknüpfer", I wrote a lot of stuff, among it at least ten - mostly uncompleted - novels. I still have them, but I won`t publish them ever, because they are not good. It took me these twenty years to develop my skills as a writer - and to make some experiences in life, which is as important for a writer as writing skills themselves!
Actually, it took me about one and a half year to write "Die Haarteppichknüpfer". It was a very uneven "production time", by the way - some of the chapters got written on one single day each, others took me months. And I tested every single chapter whether somebody who had no idea about the rest of the story would find it meaningful in itself, because I wanted to have chapters that would work as independant short stories! This testing and refining took quite some time as well.

Galaktika: Die Haarteppichknüpfer is your first novel, still, it’s one of the most successful ones, it has already been translated for seven languages. Why do you think is that?
Andreas Eschbach: I am the last to understand this really, but I guess the unusual form of the novel, which creates an unprecedented reading experience for the reader, must be one of the reasons. And maybe the story itself: I wouldn`t dare to predict whether any particular reader will LIKE it - but I dare to predict that NO reader will ever FORGET it.

Galaktika: In 2001 you have published a sequel entitled Quest. As far as I know it’s more of a prequel. Could you tell us a few words about the novel and about the reason why you gave an English title for the book?
Andreas Eschbach: "Quest" is a prequel, but it can be read independantly - and a lot of people have done so, because this novel is even more successful that "Die Haarteppichknüpfer". And the title is an English word and is not - because the novel tells the story of a spaceship commander named Eftalan Quest, who sets out for the most audacious expedition ever... But of course I wanted to play with words, because in English, the word "quest" means also "an mythic journey towards a goal", which fits with the story.
Actually, the ties between the two novels are rather thin. "Quest" plays 80.000 years before "Die Haarteppichknüpfer", but in the same universe, so that every one of the two books enhances the understanding of the other.

Galaktika: Are you planning to expand the story of the Haircarpet makers for a trilogy some time?
Andreas Eschbach: Yes, actually I have plans for several other novels set in the same universe - and all formally rather unorthodox -, but as for as science fiction is concerned, I was occupied with another project in the last years, my five-volume "Marsprojekt" series, an adventurous story for younger readers. Which, as sales figures showed, was quickly adopted by adult readers as well. This series finished, I am currently pondering the details for new stories around the hair carpet makers.

Galaktika: You have written a short story entitled The Carpetmaker`s Son in 1985 (According to Internet Speculative Fiction Database). Could you tell us a few words about it? How is it connected to Die Haarteppichknüpfer?
Andreas Eschbach: It was simply the first chapter of the novel, without any changes besides the title.

Galaktika: One can say that in a way you turned away from SF in your latest books but almost all of them still contain some kind of fantastic elements. Why is that?
Andreas Eschbach: Honestly, I couldn`t care less about whether a new novel fits in any genre or not - this is the book seller`s business, not mine. My business is to turn an idea into the best book I am capable of at that given time. So, I am not able to deny or agree whether I have "turned away from SF" - if you feel so, you will certainly do so for good reasons. All I can say is that I don`t consider fantastic elements being the core of SF, but SCIENTIFIC elements - and these I have in all my novels. As well as philosophical questions, which are as important - aren`t all SF novels questioning the conditions of human existence? So, whether a story is set in a rather fantastic context or in the context of todays world as we know it is more a question of form than of the content itself.

Galaktika: What inspire your writings?
Andreas Eschbach: Oh. This is a question to fill an evening with the answer. And in the end all I can say is: I don`t really know. It`s unpredictable. I know more or less what inspired me to a particular novel, but then again, there are always points where I can`t explain why I decided to write them the way I did. Basically, the inspiration is always something that excites me - this may be a single, strange information, or a certain subject, or even a calculation. Actually, a lot of my novels got finally inspired by certain calculations.

Galaktika: After 2000 you have written a number of young adult novels. What was your inspiration for that?
Andreas Eschbach: What gave me reason to do this was simply that a publisher contacted me and asked whether I would like to write young adult novels. And because I started with that kind of novels - long time ago, when I was a young adult myself -, it was no problem at all, it was almost like coming home. And then I wrote the kind of books that I was missing when I was young. So, in a way, the inspiration came from feeling connected to my own childhood again.

Galaktika: You are teaching writing on internet. How did it come?
Andreas Eschbach: By chance. When I started my website, I got a lot of letters from people who asked me about writing. I didn`t want to answer the same questions over and over, so I`ve put them on my website along with my answers, expecting these kind of questions would decline.
But this didn`t happen, on the contrary: More questions came - new ones! And because I felt it to be discourteous not to answer, my collection grew and grew...

Galaktika: In general are you satisfied with the progress of the people you are teaching?
Andreas Eschbach: I have no idea what people make of my answers. I hope I achieve to get those away from writing who shouldn`t write but do rather something else in their lives. And once in a while, I come across somebody who has published a book and I remember his - or her - name from an email exchange we had. This feels nice.

Galaktika: In 2004 you have edited an SF anthology. What makes an SF story good in your opinion?
Andreas Eschbach: I consider a SF story to be good if it stretches my imagination and make me understand how some strange assumption WOULD BE LIKE - and does so in an entertaining way. Three very demanding requests, I admit.

Galaktika: Do you still read SF? Have you got favourite writers who influence your works?
Andreas Eschbach: Frankly, I am not very pleased with today`s SF. Most of it, even much acclaimed novels, are just repeating worn-out stories for the hundreth time without adding something new, and I have difficulties to remember the last SF novel that excited me really. In the last ten years or so, the novels that excited me were rather mainstream novels.
On the other hand, I have to admit that I very rarely come across a book that excites me. In some years I have an "excitement count" of zero. I consider a year a good reading year if I come across more than one good novel. Might be writers are more prone to this kind of criticism than others.

Galaktika: Are you planning to get back to pure science-fiction some time?
Andreas Eschbach: I despise the term "pure science-fiction". What is that? Science-fiction as it once was? Should Science-fiction not evolve? If you are asking me whether I plan to write SF-novels in the way they were written thirty years ago, my answer is definitely no. My intention is to write novels for the century that`s ahead us. And I don`t give a damn whether anybody will put them on the SF shelf or somewhere else - as long as they end up on shelves, at least...