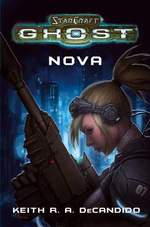 Blizzard’s creative department, honouring the spirit of their tradition, once again found great talent, this time in the person of Keith R. A. DeCandido, who has written several page-turners for Blizzard games to boost their sales.

People who enjoy reading science-fiction stories set in a noiresque world shall find that the Starcraft universe provides countless hours of joy. If you have never set your eyes on the vast armies of the Zerg and the Protoss, fear not, for DeCandido leads you into the unfurling darkness like a professional tour guide. He shapes the Starcraft universe to give a sense of wholeness and presence so readers might even find themselves wanting to pick up a copy of the original game in the course of reading his books.

I feel that the hard-core fans of the real-time strategy genre are still numerous, and they can sate themselves on this book while waiting for the game’s sequel to come out. The sequel seems to thrive in and feast on this gloomy atmosphere the trailers have previously hinted at, and the book will give you more of that.

Nova guides us into a world that we barely know, mostly due to the fact that StarCraft: Ghost has been indefinitely postponed. The third-person stealth-action game was planned to let the player follow Nova, a psychic spy from the Terran Dominium trying to put an end to the forces threatening the Dominium from both the inside and the outside.

The book presents us Nova’s youth, the time when the alien races appeared and the previous regime was overthrown. In these tumultuous times of turmoil, Nova realises she possesses the mystical powers of psi. It is during these times, too, that her fate becomes bound with the fall of a corrupt system that set her apart from the rest of its subjects.

Despite the fact that Nova wields a power barely imaginable and will later go on to change the course of the world, the plot itself is not an epic campaign, but rather a story of facing reality. Nova, a sheltered teen, comes to terms with the world, but experiences like that are quite shocking for those who have not yet seen it in its full treacherous splendour and ruthless glory.

Blizzard has been gracious enough not to deceive young teens and blue-pencil the effects of drug-taking. The decision proved to be essential, since drugs are the bread and butter of the lower classes in the StarCraft universe, both fiscally and physically.

DeCandido’s vision of the future seems eerily plausible. But if it proves to be a revelation for their readers and gives them a sense of ‘hey-that-is-just-the-way-we-are-heading’, it might help them to break the mould and free themselves from the grasp of society’s worst instincts. And that is the power lying within this book.