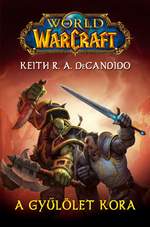 Slowly but surely, a mysterious force feeds the fire of hatred among orcs and humans, using both for its own end. Blood boils, gory battles grow in number when the two races meet. Their leaders, Jaina Proudmoore, ruler of Theramore, and Thrall, governing the orcs from Orgrimmar, are both dumbstruck by the menace and its unknown source.

Though they are old comrades and would trust each other to death, doubt casts its shadow over their heads leaving them wondering whether they will be able to soothe their people’s fury lest they should wage war on one another. Their only choice is to team up and seek out the source of this unrest together and put an end to it.

By reading Keith R. A. DeCandido’s book, we inch closer and closer to the events that bring about a certain change, a new era, the one in which the massively multiplayer, and massively popular, on-line role-playing game, World of Warcraft is set. The story takes place just three years before the chaos of World of Warcraft, and the truce still holds between the Alliance and the Horde.

Those who have yet to catch up on the comings and goings of the world of Warcraft, this book gives ample opportunity to sort out a few key concepts regarding the realm of Azeroth and its inhabitants. Those familiar with the chronicles of Azeroth should not give up on the book, either, for it lets readers brush up on their knowledge of the lands of orcs and humans. And if you are not even aware of the Warcraft universe, it is high time you started getting to know it.

As far as I am concerned, DeCandido’s novel has yet to reach the standards of a Richard A. Knaak piece or Jeff Grubb’s treatment of the self-same world of Warcraft. And yet, talent is abundant in him, and has been utilised before in his contributions towards several genre series, such as Star Trek, Serenity, Buffy, the Vampire Slayer, Andromeda, StarCraft, CSI:NY, Farscape, Doctor Who, Spider-Man and Resident Evil. In all earnestness, he has what it takes to write a good book, I merely wonder where this book fails to deliver.

I have to say, there is nothing in the way of a good story here. It is as much of a page-turner as the other series mentioned above. Still, something is not right. There is trace of an aftertaste that leaves me on the brink of satisfaction, though never quite reaching it. I cannot state for sure that this has been the best among the Warcraft novels translated into Hungarian.

But even if something is missing, the book is still a worthwhile read, at least for all the fascinating details. Maybe after finishing it, you may be able to figure out where it led me astray. Well, as they say, your mileage may vary.